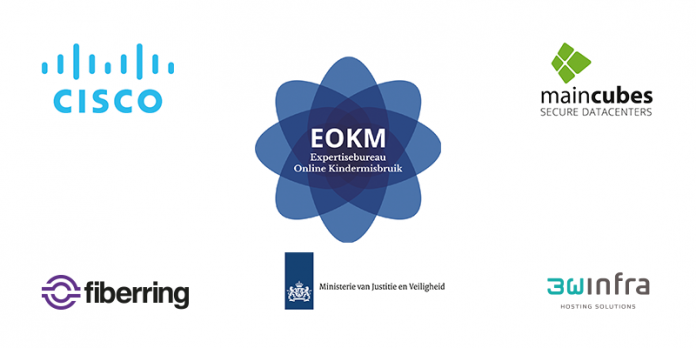 The Dutch organization Expertisebureau Online Kindermisbruik (EOKM) has the essential mission of locating child pornography content on the internet and bringing criminal charges against the offenders. An AI-supported diagnostics platform that has been optimized by Cisco and PwC is now helping the EOKM to detect cases of abuse faster. maincubes is one of the partners supporting this initiative by operating the platform at its AMS01 data center in Amsterdam. The festive inauguration of the optimized platform on May 27 at the maincubes data center was attended by representatives of the EOKM and Cisco, as well as Ferdinand Grapperhaus, the Dutch Minister for Justice and Security in the Rutte III cabinet, who thanked everyone involved for their donations and commitment to this crucial initiative.

maincubes is strictly opposed to all unethical and criminal online activities at any of its data centers, and it takes its social responsibility very seriously. We are proud to be a contributor in this very important initiative, and to be helping to protect members of our society as a partner of the Dutch government and the EOKM. We support the EOKM and Cisco partnership by providing rack space for the servers they use in their work to prevent child pornography on the internet. An innovative AI-based image analysis technology offers the law enforcement authorities brand new possibilities for the automated identification of child pornography content on the internet, and allows them to work on a much faster and larger scale than was previously possible. A pilot version of the AI-supported Sexual Child Abuse Reporting Tool (SCART) scanned more than 18 billion images in 2020 – and found seven million hits with criminally relevant child pornography.

The optimization of the high-availability and very secure system means that the analysts only have to look at a very small percentage of the material themselves. To identify relevant content the server creates hashes – or digital fingerprints – of known images with child pornography content then performs large-scale searches of online databases to identify identical material. Not only does this considerably speed up the process of searching for criminal activity, therefore bringing help to the victims faster, it also reduces the psychological burden on the analysts who have to view images of child sexual abuse on a daily basis in the battle to eliminate child pornography networks.

The high-performance infrastructure has made another major international project possible, allowing PwC and the EOKM organization to investigate how data records from diverse sources can be used to identify images of child sexual abuse. The goal is to use artificial intelligence to a greater extent in the future so that analysts are less exposed to the psychological trauma of having to look at the images themselves. Thanks to this tool the Netherlands has been able to declare war on the growing proliferation of child pornography content on the internet. The EOKM evolved from the internet child pornography hotline “Meldpunt Kinderporno” that was established in 1995. The bureau is affiliated to INHOPE, the international network of internet hotlines throughout the world, and it works hand-in-hand with the police authorities. We are delighted to be supporting this important initiative as its partner.

Colocation vs. Cloud computing? It’s not one or the other

2 december 2021
Source is New York Times The payments company Square said on Wednesday that it was changing its name to Block, a nod to one...

1 december 2021
Source is ComputerWeekly.com All 193 member states of the United Nation’s Educational, Scientific, and Cultural Organisation (Unesco) have unanimously adopted a series of recommendations...

1 december 2021
Source is ComputerWeekly.com The City of Wolverhampton is piloting a mobile app that will reward users for behaviours considered to be healthy. Aimed at...

1 december 2021
Source is ComputerWeekly.com Cyber technology supplier Kaspersky has become one of the first organisations in the world to try to address the security challenges...